Should we invest in Bitcoin?

Most of you are here reading this article because you saw in the news that the Bitcoin price was rising and you’re wondering if you should be putting your money into it so you too can become the next Bitcoin millionaire. It is in fact true that Bitcoin has made some people rich, but it has also wiped out some people’s savings completely – it all depends on when you choose to buy and sell. If you buy at a high and sell at a low (like most people have done after buying into the hype of the most recent Bitcoin rally) then you will incur a loss. As always, investing over the long term is always best. My personal view is that if you do choose to invest in Bitcoin it should only make up a small percentage of your overall portfolio.

Bitcoin is essentially a form of money that is completely virtual. It falls under the umbrella of cryptocurrency along with Litecoin, Ripple and many others. You can use it to buy things just as you would money, but it is not accepted everywhere. A Bitcoin is a computer file which is stored in a ‘wallet’ for security and each transaction is recorded in a list called the blockchain.

Using Bitcoin to spend is relatively secure because all transactions can be traced in the blockchain to ensure the authenticity of any traded currency. Opponents of Bitcoin comment on how the currency can is used to fuel criminal activity undetected. There have also been some instances of banks not accepting transfers of Bitcoin from digital wallets. There was also a case of a guy who forgot his password for his ledger and was unable to access $220m worth of his own Bitcoin. The value of Bitcoin is generally quite speculative and as a result the valuation is very volatile. We have recently seen much larger institutions pledge to invest more into it in future and the general mood of not trusting central banks/governments has led people to think that cryptocurrencies are the future.

I don’t invest directly in Bitcoin because of the volatility of the asset and because I don’t fully understand the dynamics of what drives its price. I instead choose to invest in the underlying blockchain. 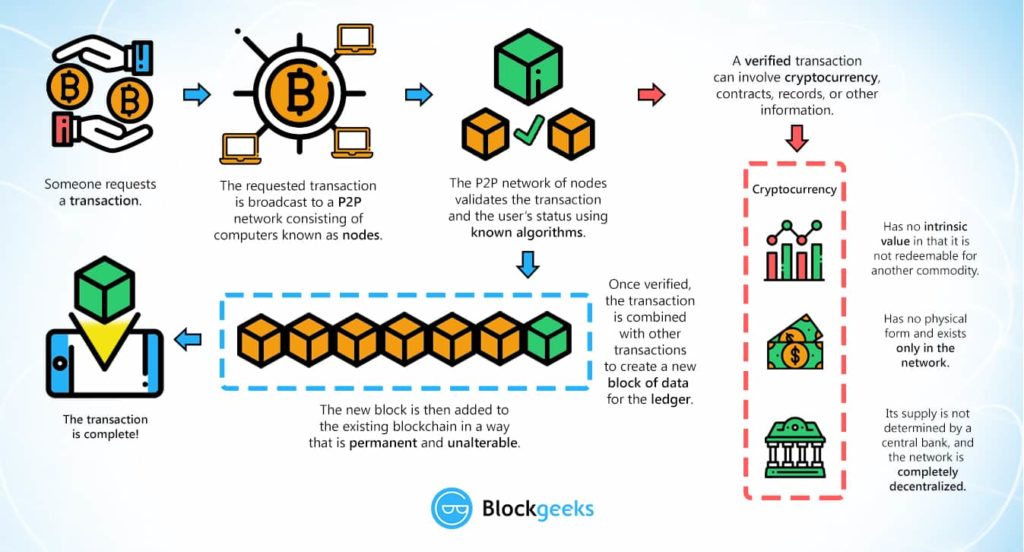 Blockchain is essentially what powers crypto currencies. It is a form of ledger technology that is able to keep records in a decentralized manner. If we think of bank transactions for example, instead of storing all that information on internal bank servers, it can be stored on a public ledger that is accessible to everyone. It is seen as secure as it is anonymous and cannot be modified. A helpful way to think of blockchain and cryptocurrency is that blockchain is an engine and cryptocurrency is a car. Engines have lots of other uses and blockchain forms a key component of a range of other things such as digital identification and copyright protection.

I personally would only invest in cryptocurrency with a small money that I was happy to lose – it’s definitely not an asset that I would throw all my life savings into because there is no real underlying value and also it is highly volatile. Investing in blockchain is a less risky option as the asset itself is valuable in a practical sense. There are a number of ways you can invest in blockchain including investing in funds that focus on holding companies that have exposure to the blockchain creation process and also buying those companies individually yourself.

One example of a fund that provides exposure to blockchain is the Invesco Elwood Global Blockchain ETF.

This fund invests in a collection of different companies in the sector including those that are actively involved in mining for cryptocurrencies. These companies generate real revenues and have some intrinsic value. The benefit of investing in a fund is that you have the added benefit of diversification – if one company goes bankrupt you still have access to returns of other companies via the fund. Let me know your thoughts on investing in blockchain and cryptocurrencies in the comments below!

DISCLAIMER: Past performance is not an indication of future performance. With investing, the value of your money can fall as well as rise. This is not financial advice – please carry out your own research.