7 top tips on buying property during a pandemic

The global economy has really struggled this year. The first half of the year saw a flash crash in stock markets, followed by a quick recovery powered by a super-saiyan level of monetary stimulus (money printer go BRRRRR) from central banks coupled with bored people on lockdown creating investing/trading accounts. Unemployment levels have risen markedly, whilst the economy has entered into a recession that will leave visible scars for a long time. What a time to be alive.

In the UK, Chancellor Rishi Sunak has been tasked with getting the economy moving again and has unveiled economic statements with policies to that effect. It was noted earlier this year that the UK economy had shrunk by 25 per cent in just two months – which is “the same amount it grew in the previous 18 years.” Clearly there is a desire to get people back to work and increase productivity and output, whilst also managing the spread of COVID-19. As a result we saw discounted restaurant eat-in meals throughout August, various schemes to get young people into work and stamp duty changes. Stamp duty changes were particularly interesting as the allowance was raised to £500,000. Before the chancellor’s announcement, first-time buyers paid no tax on properties up to £300,000 and 5% on any portion between £300,000 and £500,000. As far as I can see, the new stamp duty holiday does not benefit many young, new buyers directly (as the average value of a FTB property in the UK is £220,000). The real winners in this stamp duty scenario are those buying homes for more than £500,000, or second homes, who will still have to pay stamp duty, but their total bill will be lower as a result of these changes.

The crisis has also meant that lenders are becoming more strict about who and how they lend. Most mortgage products now require a 15% deposit (instead of the standard 10%) and any bonuses that you may have normally included are now ignored. Now more than ever it is difficult to imagine how FTBs can take that first step on the property ladder. I posted a poll on my Instagram story to explore this (over 100 people participated) and had varying responses:

The majority of people did not think that it was feasible to buy a property in the UK with a 15% deposit, but I disagree. In fact, now that we know how uncertain the economic environment is, it is better to have a higher amount of cash down so that you are not as susceptible to the impacts of changing interest rates in future. Normally a higher deposit means you end up getting a more favourable interest rate and end up paying less on your mortgage over the long term. Interest rates are at historical lows and so the danger of a low deposit is that you actually own less of the proportion of the property and will struggle to make your monthly repayments as these rates start to creep up again (unless of course your mortgage is on a fixed rate). Below are seven steps everyone can take in order to secure a property – even with a slightly heftier deposit.

1. Have a plan – Whilst I acknowledge that now is a very difficult time for a lot of people financially, I think it has served to show just how important it is to always have a plan when it comes to money management. Things like emergency funds have been ignored by people for so long and it has taken a true crisis to show how important it is to plan ahead. I think a lot of people have a misconstrued conception about how big a deal buying a property is and feel that a timeline of 2 years plus is too long. I tell you now – it is not. Sometimes things take sacrifice and time – a human baby has a gestational period of nine months and no matter how much a mother may want it to come out earlier, it is just not feasible. As millennials we have grown up in a world of instant gratification – next day delivery, real time feedback on posts etc. It is difficult for us to grasp the notion that waiting and sacrificing for a few years is a normal part of life. Think of your target property value and write out a plan for how much you need to save each month in order to get there. Make sure you incorporate all the necessary fees – deposit, stamp duty, valuation, lawyer fees, electronic transfers etc to ensure your plan is realistic. 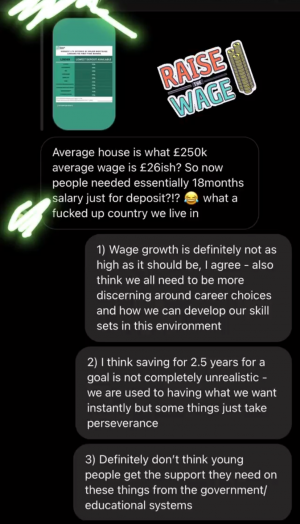 2. Live within and below your means – Use the lockdown as an opportunity to increase your savings, even as things appear to return to ‘normal’ again. It’s okay to say no to going to brunch, it’s okay to go a few months without buying clothes and it’s okay to not buy/lease a car (see screenshot below). It is easy to get carried away with spending, but the more you shift your mindset the easier it will be to reach your goal. 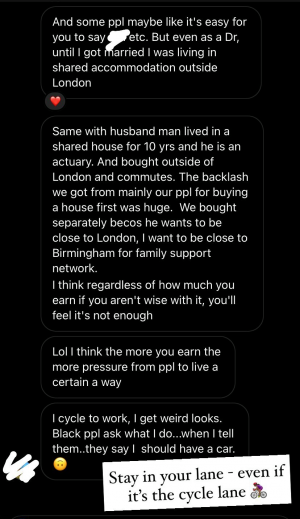 3. Look outside of London – The mere thought of not living within 15 minutes of a tube station is enough to make a lot of us cry. However, you can get a lot better value for money if you look further afield. The rise of working from home is likely to see increased property demand in more suburban areas and if you no longer need to make a daily commute into London, then it makes sense to live slightly further out. At university I had a friend who lived in Birmingham and would commute down for her lectures during the week. Also note that your first property is not necessarily where you will live forever! After a few years you may find that the equity increases (additional value of the property above what you bought it for) and you can use that money towards buying another property – in London if that is what you want at that point in time. One area that you can live in and be in London within an hour is Basildon. Essex and Kent are hotspots for first time buyers. 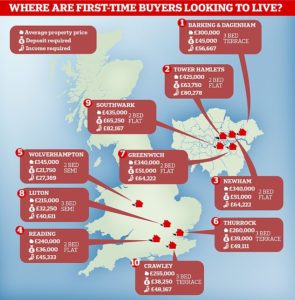 4. Invest in yourself (build your intrinsic value) – Throughout this whole coronavirus saga, there have been some people who have unfortunately lost their jobs completely or been put on furlough.  Unemployment can be difficult to deal with on an economic policy level. There is always some level of unemployment within an economy and the whole of the labour force (those of age who are willing and able to work) is never really fully employed. Frictional unemployment exists in any economy due to people being in the process of moving from one job to another. The more serious unemployment is ‘cyclical unemployment’ which occurs when the economy enters a downturn. The longer people are out of work, the more likely they are to lose the skills they need to be employed and that is why it is so important to minimise the time that people spend out of employment. It is important to build your skillset as much as possible to ensure that you can command job roles with a higher wage. Become more specialised and take vocational courses and further education to help you become a more valued employee or to start your own business to generate more income.

5. Take advantage of available schemes – There are some things that have been put in place by the government that are very helpful –  the Lifetime ISA (which gives a 25% bonus on whatever you save) is great. There is also the Help to Buy equity loan scheme. Look into these options and decide which is best for you and start paying into them ASAP. Whilst I am personally not keen on shared ownership schemes, you should also do some research around them to see if they may suit your personal situation. 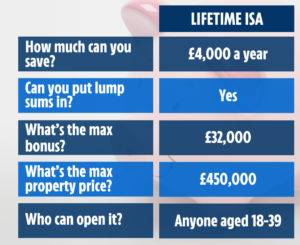 6. Find a good broker – When watching the news it is easy to assume that because the economy has crumbled, everyone is losing jobs and banks are not lending, that there will be no good mortgage products for you. A lot of the searches we do for products online do not show the full extent of available options and the market is fast-moving with products being brought out (and taken away) every day. Having a broker who is switched on and is able to find you the best deals can be a lifesaver. It is fine to have discussions with a broker right at the start of your property saving journey as they can tell you if your plans are realistic and guide you towards your best options. My advice would be to get someone who is completely independent (not tied to a specific bank) as they will then be able to search the whole market to provide you with the most suitable product.

Are you planning to buy a property – do you think 15% as a deposit is feasible? Let me know your thoughts in the comments below.